Morocco tours from tanger to tanger, in 8 Days 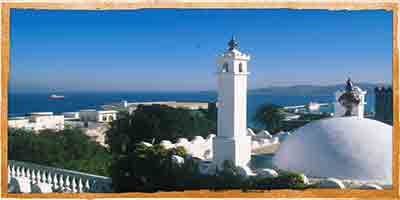 Upon arrival in Tangier, depending arrive by ferry you will find the Moroccan driver, you will depart Towards Fes, Depend in the Arrival Time you will Have an oriental Tour to see the Ceramics factory, Mellah and the 17th century Ibn Danan synagogue, also the Kings Palace, the Tomps; borj north and borj south to see the view of the Medina in the Time of the sunset. Diner and Overnight in the Riad.

After Breakfast you will begin your guided tour of the medina, one of the world's largest walled in cities. You will explore the narrow streets lined with fresh fruit, mounds of spices, intricately woven Berber carpets and many other art objects of Morocco. you will visit Mosques including the Quaraouiyine Mosque founded in 859 by Fatima el Fihri and the Andalusian Mosque dating back to 860. Entry is not permitted to non-Muslims, Fountains including the Nejjarine fountain, Medersas (Koranic schools) founded as early as the 13th century, Batha Palace now a museum of arts and traditions, Chouwara Tanneries, Souks including Souk Attarine, one of the liveliest in the city, Bab Boujloud with its green and blue ceramics, After lunch you will begin your ascent We pass through Ifrane, a winter ski resort in a totally un Moroccan style built by the French in the 1930's to resemble a Swiss village; we visit the cedars forest in azrou you will see the monkeys, drive across the Middle Atlas Mountains. Most of the time will be spent winding your way through the beautiful forests, springs, jagged rock faces, and Berber villages as you cross the Atlas Mountains and begin to descend towards the Sahara Desert. Half way we will stop in Medilt for Diner and Overnight. 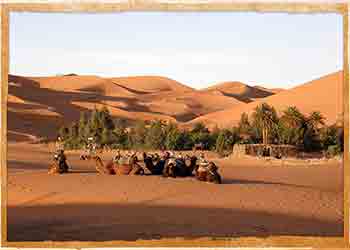 After Breakfast depart towards the Sahara desert, we will stop in a few panoramic views to see the a huge oasis of palm tree, we stop in Rissani the first capital of Alouite Dinasty for lunch with the local food Pizza Berber “Medfouna”then we will Take The 4x4 towards the Desert, After Rest your guide and camels will be waiting for you after rest, you will start a camel trekking across the sandy dunes of the erg-chebbi. Camel trek across a desert landscape,you will enjoy the beauty of the sunset on camel, after 2 hours you will reach to the desert camp to spend night in a berbre tent. At your desert shelter, your camels are hobbled and mint tea is served. After a wonderful dinner, watch the Stars and overnight in The Tent.

After a Delicious Breakfast, You'll depart for Ouarzazate, traveling the rugged Road of a Thousand Kasbahs that rise up like turreted sand castles along this ancient caravan trading route. This area has long been a popular location for Hollywood films such as The Last Temptation of Christ, Jewel of the Nile, and most recently Hideous Kinky. The central region is one of the most exciting and romantic destinations of Morocco nestled along rich river valleys, palmeries and burnished mud-brick homes ablaze in vibrant color under the shelter of the blue desert sky. We stop for lunch and walk in todra gorge, We'll travel through the Dadès Valley past dramatic escarpments we reach Ouarzazate in the afternoon, Diner and overnight. 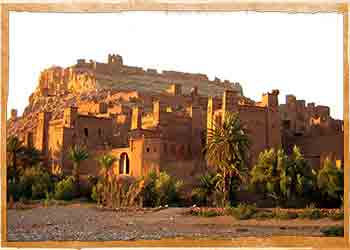 After breakfast we will visit the town of Ouarzazate, including the Kasbah of Taourirt and the Atlas Studios movie studios, the largest and most famous of all Africa. From here we head to the Fint Oasis, near Ouarzazate. we stop in ait ben haddou we will arrive in time of lunch. Here we can visit the famous Kasbah, declared UNESCO World Heritage and which was the scene of films like The Gladiator, Babel, Lawrence of Arabia, we coutinue passing through the High Atlas and the Tizi-n-Tichka pass, along a road that climbs from the plains up to 2260 m above sea level passing through small villages, small waterfalls, through the continuously changing landscape and colors of these beautiful Mountains, Dinner and Overnight.

After breakfast, you will have full day tour to visit Marrakech. The visit will include: the Menara gardens, a magnificent pool surrounded by flowers, the Koutoubia Minaret, the Saadian Tombs, the museum of Dar Si Said with the best display of Berber arts and crafts, and the Bahia Palace…lunch will be in local restaurant, after that we walk through the colorful Souks of Marrakech. We will take the Way Towards Casablanca, the economic capital of Morocco, Dinner and Overnight.

After Breakfast you will visit the Hassan II Mosque. As it is the second largest mosque in the world and indeed a beautiful work of art, it is one of the rare mosques opened to non-Muslims,we will Travel Towards Tanger. we will stop to visit rabat the capital politics of morocco, and also overlooks the sea, we will see the crenellated red ocher walls, more than 5 km long in total and built in the period of ruling the sultan yacoub el-mansour, which give the city a very special character that distinguishes it. you will cross the medina and its souks, more authentic than others because the products of shops have turned to local customers. than we visit the Kasbah of the udayas, erected by a terrible tribe of predators in the twelfth centry. then we visit Hassan tower, where 4 facades are decorated different from each other,three in shades of pink and one in the gray because of the sea breeze, the remains of the old mosque and the Mohamed 5 mausoleum next to the tower, we Continue Towards Tanger for Dinner and Overnight.

After Breakfast Transfer to the Port or Airport in Tanger for the End of the Trip.

Morocco tour from fes to marrakech, in 10 Days... 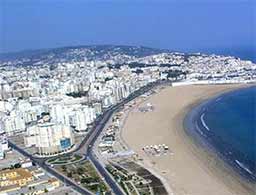 morocco travel tours from tanger to casablanca, in 8 Days...

Morocco tours from Casablanca, to marrakech, in 8 Days...